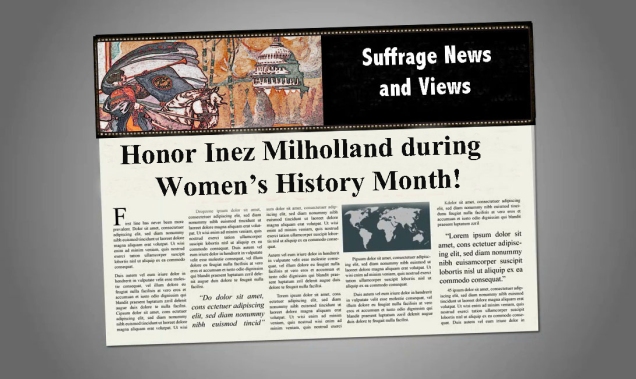 Keeping the memory of Inez Milholland in front of nation continues. During 2018. Molly Murphy MacGregor nominated Inez to the National Women’s Hall of Fame. We won’t have their answer until next year, but the hope is that Inez will finally receive the recognition so long overdue.

We spent 2016 honoring Inez during the centennial observance of her death. U.S. Rep. Jackie Speier nominated Inez for a presidential citizens’ medal in 2015. During 2016, Martha Wheellock and Wild West Women produced and distributed a film about Inez, “Forward into Light,” a 15-minute film distributed to thousands of individuals, schools, and organizations across the nation. Friends and supporters delivered a petition to the White House supporting the presidential citizens’ nomination. A Pomeroy Foundation road marker was installed in Lewis, NY at Inez’s grave. We were busy during 2016 and 2017 blogging about the remarkable programming across the nation commemorating her contributions.

This posting is a reminder by blog editor Marguerite Kearns to continue the work. Send news about Inez to share: MargueriteKearns at gmail.com

Behind “An Unfinished Revolution,” a book by Marguerite Kearns